The Jolly women I’m referring to in this post are my dad’s mom, Myrtle May Jolly Hemenway, and her sisters. She had 5 sisters, and 5 brothers:

Their mother, Martha Jane (Mattie) Brantley Jolly, is the woman in this picture. 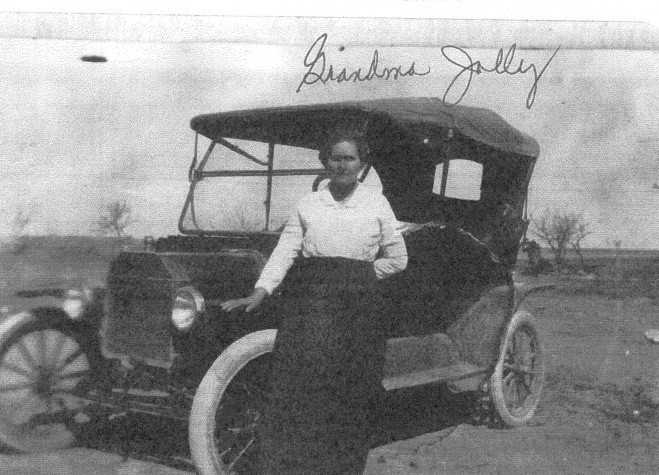 My dad’s Jolly side of the family is from the west Texas towns of Pioneer and Midland where they had a ranch. In the early 1900s the family bought their first automobile. The story my dad always told was that the women in the family were thrilled with the adventure of driving these new machines, while the men preferred to keep riding the horses when they needed to get around.

This is from the short story “My Brothers and Sisters As I Remember Them” by Clara Jolly Henderson (my grandma Myrtle Jolly Hemenway’s sister).

“Papa got the bright idea to move to New Mexico [from Texas] where he had some land. When I was seventeen and Thelma was twelve he bought a Ford touring car and turned it over to us with a Ford manual and we learned to drive it and fix it when it wouldn’t run.

[Moving out to New Mexico], Papa and Mama and smaller children went in the Ford Touring car and Thelma and I drove the pickup.”