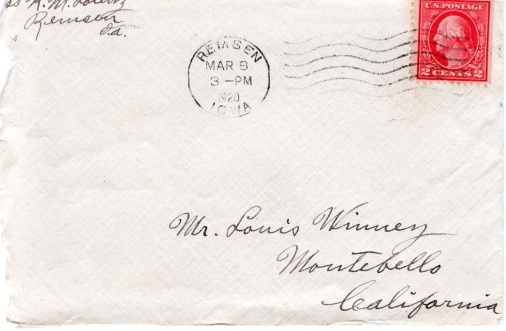 My grandma on my mom’s side, Patricia Winney Berger Fangmeyer, passed away on April 13, 2004. Some of what she left behind were original family letters written in the mid-1800s to the mid-1900s. I scanned the originals and filed them away on my hard drive.

I remember reading them at the time and thinking I should transcribe them to a Word doc to make them easier to read, and send to family members scattered across the U.S. But, at the time I was working full time, my son was in elementary school, and my husband traveled a lot for business. Not exactly the time to add more to my plate.

Recently, I dug back in and have made transcribing them my project. As I read the letters, among the names I’d become so familiar with during my decades of researching my family history, was an unfamiliar one – Aunt Kathryn Lorenz. I had never seen that name in any of my research, yet here were three letters she had written to Lou and Mabel Winney, my mom’s maternal grandparents, in 1920 and 1921, signing off as “Aunt Kathryn”.

I’m always up for a good problem solving adventure so I set aside the transcribing and got to work finding out who Kathryn was and how she was connected.

Clues in the Envelope

All  three envelopes were postmarked from Remsen, Iowa, in 1920 and 1921, so I knew where and when. Luckily, one of the envelopes also had the sender’s name: Miss K. M. Lorenz.   It’s hard to read that in the picture of the envelope in this post, because it got cut off when it was scanned, but it’s clear to see on the original.

My next step was to reread the letters more carefully to pick up any clues that would help me focus my online research.

In the letter dated March 7, 1920, she mentions “John” taking an after dinner nap, and generally talking as one would about someone they lived with. I assumed that John was her husband so made a note to search “John Lorenz”.

She also talked about visiting Lou and Mabel four years ago and mentions Lou’s brother Abe. In the September 6, 1920 letter she doesn’t mention specifics, but she references personal details that Lou and Mabel have written to her about, so I assume it’s a very close family relationship.

In one letter, Kathryn mentions a cousin in Wisconsin so I knew it had to be on Lou’s “Winney” side of my family, and not Mabel’s “Wallberg” side. This will make it easier knowing I just need to focus on that one part of the family.

I searched for Kathryn Lorenz on Ancestry.com where I have all of my family trees. The only info I found was that she was living in Remsen, IA in the 1915 and 1920 censuses. In both, she was living with a John DeViche and in the 1920 Census was listed as his cousin (this is when I found out they weren’t married). So at least now I had another last name to track back from.

My mom’s uncle Mike, Lou and Mabel’s son, had done an extensive research project on the Winney side of the family so I looked in his book next. There were no DeViches who had married into the Winney side.

And, a Katie Lorentz is also listed as 5 years old, also as a granddaughter. This must be my mystery Aunt Kathryn Lorenz. Yes – I found the link!

There is also an Angeline Heuertz listed as age 23 and a stepdaughter. Three different last names in one house with varying degrees of relationship. So I had found that the Wellman and Lorenz families are connected, but not how. This this wasn’t going to be as easy as I thought!

The last name Heuretz provided a possible clue. Opening the census record, it said that Angeline Heurtz is Stephania’s daughter by first husband.

When I was searching  I found that John DeViche’s parents were Catharine Heuertz and Constantine DeViche so this must be where the connection is. I just need to do some more digging to find it. It may not be a blood connection, but I felt like I was closer to solving the mystery of who Aunt Kathryn was!

John DeViche is the Key

Since Kathryn lived with John DeViche; was listed as his cousin in the 1920s census; and his mother’s maiden name was Heuertz (the same last name as Stephania’s daughter, Angeline), I figured he would be my best chance at finding the connection.

So, I started a new tree in Ancestry.com just to track his family. I put him as the main person and worked back through the Heuertz side of his family tree to see what brought the Wellman, Lorenz, and Heuertz names together in one household in 1880.

I was hopeful that Ancestry.com would have John’s grandparents’ names in the database to see if the relationships I was looking for wasn’t a direct descendant. And they did – his father Constantine’s parents were listed as Alexandre Joseph DeViche and Marie Oda Moreau.

I went back to search on Stephania (Kathryn’s grandmother) and found a marriage record for a Stephania Josephine Maria DeViche and Henry Gaus. This was the first I’d seen of her maiden name. It listed her parents as Alexandre Joseph DeViche and Marie Oda Moreau and that she was born in 1819 in Belgium. So, Stephania and Constantine DeViche were siblings, and Stephania is my John DeViche’s aunt.

I also found a record of Stephania DeViche’s first marriage to Jean Mathias Heuretz. Her brother Constantine married Catharine Heuertz, which left me wondering if she and her brother married siblings.

After digging, it seems that the same last name was a coincidence or perhaps even a distant relation since Jean Mathias Heuertz and Catharine Heuertz don’t have the same parents.

Who is Henry Gaus?

All of this was very interesting to me, and I was very glad to have found the connection from John DeViche back to at least one person in the 1880 Census record that started my search.

But, I still hadn’t come any closer to finding out the connection to Aunt Kathryn Lorenz, or “Katie Lorentz” as she was called in the Census record. So, I decided to take another angle and find out more about the head of the household, Henry Gaus.

When I did a search on him initially, nothing came up except for the 1880 Census record so I knew there was probably another spelling of his last name. I went back to the actual image of the record and saw that the writing could be interpreted as Gaus or Gans. Since nothing came up for Gaus before, I searched for Henry Gans and bingo!

There is a 1900 Census record for Henry Gans, still living in Bloomington, WI. And who is still living with him? Angeline Heurtz, 34 yrs, and Kate Lorenz, 23 yrs. His wife, Stephania, had died in 1897 so it’s just the three of them now.

This was good info to know, but I knew the connection had to be on Stephania’s side and not her second husband’s. And the connection to Lou Winney, who Kathryn wrote letters to later in life, will be through his mother Elizabeth Wellman.

Side Note about Ancestry.com – After you put your initial person into a new family tree on Ancestry.com, everyone after that has to be connected to someone in the tree. And, when you have someone in your tree, Ancestry.com automatically crawls the records on a continual basis to show you potential records that might apply to that person. That’s how I was able to get information pretty quickly on John DeViche’s family.

But, without knowing the connection that Kathryn Lorenz has to the family I can’t add her, thus depriving me of Ancestry.com’s recommended records.

Now that I have her name as Kate or Katie, I can search on those and see what I come up with. I’ve done searches on Kathryn Lorenz (Lorentz) and both of those names in general without seeing any obvious family for her.

I had records from another researcher that her name was Elizabeth Wellman, but on the 1870 census it looks like Elizabeth Hellmann. And in the 1920 census, her name is listed as Elizabeth H. Winney (her middle name is Jane so the H maybe from Hellmann??).

Stephania has a daughter Mary Heuertz, whose birthdate is listed as May, 1842 – which would be the same year as the Mary listed as Elizabeth Wellman’s mother in the 1870 census.

Unfortunately, there is no date of death listed for Mary. Next step is to look for marriage records for a Mary or Marie Heuertz.

In most of the records I’ve found so far, there are different spelling variations for the Heuertz families.

And, Wellman may be Hellman, making it difficult to find marriage records for Elizabeth Wellman’s and Kathryn Lorenz’s parents, as well as their birth records.

Also, Kathryn is listed in various records as Katie, Kate, Catherine, and Kathryn.

What I do know

I will keep digging and researching to see if I can find that last piece of the puzzle that connects the parents of Kathyrn (Katie) Lorenz and Elizabeth Wellman – and with it, my blood tie to Kathryn.
Side note: I asked my mom if she remembers her mom talking about an Aunt Kathryn in Iowa. My mom said that when she was about 14 yrs old (1957), her mom went to Iowa to visit an Aunt Kathryn who was ill. I didn’t find that name in the 1930 or 1940 Census so perhaps it was another Kathryn in the family.

2 thoughts on “The Mystery of “Aunt Kathryn””